In response to the killing of another black man,

,by the Minneapolis Police Department.

The footage, taken by bystanders on the scene yesterday (Memorial Day) is hard to watch. It made Mayor Frey almost cry during his address. One officer in the video holds his knee down onto the neck of George Floyd; while the other defends his partner’s atrocities. The video goes on like this until George Floyd is no longer breathing. The community, and the world are outraged.

The Powderhorn Minneapolis neighborhood came out this afternoon to protest the killing of another black man, by the police. People started gathering at the corner of 38th & Chicago in the early afternoon. By 4pm there was a one block radius closed by the community. The crowds swelled as the day grew on, and citizens started to speak. One after another — the people stood up and expressed their opinions, and love for the neighborhood, and it’s people.

The March East on 38th

This community is not going to stand by and let this happen, without redress. Mayor Frey did fire the 4 officers involved, this morning. This is the first time it has happened in recent memory (ever) — said one long-time activist, speaking outside of Cup Foods.

By the time neighbors started marching east on 38th — to the police station; thousands of people had gathered, and taken the streets. Many disparate walks of life were all in unison. There was much talk about about defending our neighborhoods, and opposing the police.

Not everyone decided to march to the Minneapolis Police Department’s 3rd precinct. Some had a different idea, a more practical response. One community member was very clear on his attitude and intentions. Hear him in his own words. 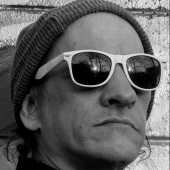 Spencer Butler @TCOSagent is a Real Estate Agent in Powderhorn, Minneapolis. Hi! I’m Spencer Butler. I’m not your normal agent. Truth be told, I’m not your normal . I’ve lived a few different lives — all leading to this REALTOR® world. Now that I can, legally, refer to myself as a REALTOR®, I intend to make great use of it. I have been a wandering member of the Punk Rock community since I was 15 years old. I have seen many bands, in many cities, and participated in many pits. I have made a lot of great friends that are still very much a part of my network. I have also been a Linux Systems Administrator for the better part of 25 years. Between the punks and the geeks, I have accumulated quite the eclectic network of friends. Understanding how, and why things work has always been my go-to motivator. As I write this text, I am new to Real Estate, and do not have a complete grasp of how it works. It is my goal to learn, grow, and better understand this REALTOR® world — so that I can help others reach their Real Estate Goals. Once I have a better understanding of Real Estate, I will update my BIO to reflect that knowledge.